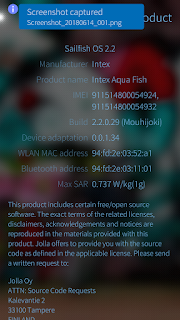 I installed the update yesterday. I had to go via ssu re and version --dup route since its not yet available for AquaFish.
Anyway the download was having issues. It gave up the first time after downloading about half the things after nine tries. I once again fired upbthe same command. And this time it was done.
I rebooted the phone. And on restart I was on 2.2. Overall there are not many big changes -mostly bug fixes and enhancements. Only bigger change is with fullscreen view of gallery items. Now they open in a new popup and you can swipe left right in this same popup to see next or previous image/video in fullscreen. I noticed slight lagging when the new image is displayed. But overall the usability improvement is good.
There are many other small improvements that polish the apps further. I did not notice any slowdown or performance issues in this one day. Lets hope it keeps going as smoothly.
Thats it for now. Adios!
No comments:
Email ThisBlogThis!Share to TwitterShare to FacebookShare to Pinterest

About the three kind-of crappy phones I have...

I actually have four phones with me right now. They are in order of age - Nokia C5-00 5MP, Karbonn Titanium S1 (re-badge of Cherry Mobile S1), Panasonic T44 and Intex Aquafish.
Sometimes I think that if I sold these all, then I can afford a decent mid-range mobile. But they each have their own character points due to which I find hard (or in case of Carbonn Titanium S1, since it's junk,) impossible to part with.
I mentioned 3 in title because, the Nokia I can't use anymore even though it supports 3G and can technically still be used, is not smart. it does not have whatsapp or any other apps for that matter. Google contacts can almost not be synced with it. And ultimately it's just a glorified MP3 player right now.
As to the Karbonn Titanium S1, it's a phone that I bought in I think Oct 2013. It's not dead yet is a miracle. Though looking at its current condition - power button almost dead, screen with white lines and it's ancient Qualcomm S4 play chipset is just not cutting it any more. But I have replaced it's dead battery and now I can use it for GPS Navigation on outdoor trips. It works fine for this single use.
Coming to the next two phones - I use them alternatively these days. The Panasonic T44 is very entry level phone - but it manages to kick some serious ass when it comes to value for money. This Rs 3200/- (about $50) phone gets me a full day's battery life, the UI is smooth and responsive, and it lets me do almost everything non-work that I want to do on my smartphone. Badass!!!
Intex Aquafish is not badass. But its damn special in it's own way. It's got Sailfish OS!!! And it's so intuitive, such pleasure to use, it just can't be expressed in words. It's not perfect - can't connect to my office wifi thanks to crappy enterprise WiFi support. But using it just feels much better than using Android! I bought this one for merely 5000Rs (about $77), and with 5" HD IPS display, 2GB RAM, 16GB Rom it's plenty value for money. And thanks to Sailfish OS being so light, the snapdragon 200 feels like a Snapdragon 615 for sure. In it's earlier versions there were a number of features missing, but it's been getting updates continuously. And so has achieved quite a bit of feature parity with Android. Just couple of weeks ago there was another update that shall take the version to 2.2. And there is talk of Sailfish OS 3.0 which will add more features. I love this about Jolla. Their first Jolla phone is still getting updates, years after it's release.
So none of these phones are great on their own but they all are special for me. And so I keep using them.
No comments:
Email ThisBlogThis!Share to TwitterShare to FacebookShare to Pinterest

ZTE is not shutting down anymore....

Apparently Donald Trump cares more about Chinese jobs than American, and so in exchange for a dowry of about a Billion $s, ZTE is being allowed to keep the shop open!!! Three cheers for capitalism!!!
No comments:
Email ThisBlogThis!Share to TwitterShare to FacebookShare to Pinterest
Newer Posts Older Posts Home
Subscribe to: Posts (Atom)