A stint with customizing GUI's

Hi,
Here's some screen-shots of my current operating systems: 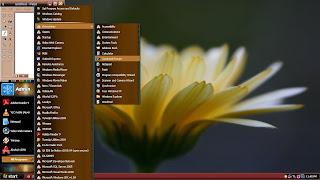 One week of Laptop Pt. 2

Hi everybody,
After an exhausting weekend I'm back here to tell you the remaining tale of the day.
Yeah, so we took a look at the Win XP and Ubuntu Lucid installationa on my e-machines e727. The remaining two OSes are Windows 7 and Kubuntu. Obviously these are hobby installs I don't need any more than two OSes at once.
3. Windows 7:
Windows 7 has come to be a very good OS when compared to the junk that was Vista. Well there are things that windows can't do - like shutting down in 4 seconds like Ubuntu or starting up in about 10 seconds which again Lucid manages effortlessly. But still windows 7 is far better OS in windows stable. The install went smooth. And the OS booted with most of the things working. I needed the Video, LAN and Wireless drivers to be installed using the Resource CD that I got with my Laptop.

One week of Laptop Pt. 1

Wow! I didn't even noticed how this week flew by. Yeah, I was busy. Too much work. Too much hassle around. So many meetings, new schedules. And I am not even getting this Sunday off. Well, this got to suck, but yeah this is time I did something and I'm doing it.
I didn't go into high gear with my 727 though(that's my acer e-machine e727). I went on to install WinXP followed by Ubuntu 10.04, Kubuntu 10.04 and later (Just for the sake of it) Windows 7. And everything is running smooth as ever.
1. WinXP SP2: The installation was as boring as usual. Took about half-an-hour and later a hour to install drivers and various essential apps. I had everything working fine and the RAM utilization was just 148MB/~980MB. That's definitely cool, except WinXP takes longest to boot up and shutdown. So just okay experience.
2. Ubuntu 10.04: This was also as boring as usual. (I've done a no of Ubuntu installations since this Jan'2010). Took about 20Mins and I had it up. Next I set-up  apt cacher. And then so many packages.... I was exhausted by couple of hours and still I didn't have everything I wanted Up and running.
One thing I noticed was that the brightness settings for LCD didn't work. After some searching I found out that the devices are arranged a bit different and where I should have a LCD, I had an OVGA. But the kompiz effects worked brilliantly and everything worked out of the box besides.

No comments:
Email ThisBlogThis!Share to TwitterShare to FacebookShare to Pinterest
Labels: Review

some discussions worth noting on UUC

It's difficult any way I say it. And I know there are many more from where I come who frown on me. But I made myself not care. I just moved ahead leaving behind a wake which contained all that I had discarded. It contained things, memories and people. I set myself these impossible goals and I labored to make them come true. I wend on and on not caring those who needed me, who cared for me. I was selfish. Selfish for my goals. And I didn’t even blink an eyelid when I was questioned. I had a purpose. And I expended enormous amount of myself to achieve something.

This mini-HOWTO shows how to build a minimal Debian .deb package.
Read more »
No comments:
Email ThisBlogThis!Share to TwitterShare to FacebookShare to Pinterest
Labels: linux

83 Ways to Trash Your School

Liberate your life! Smash your school! The public schools are slowly
killing every kid in them, stifling their creativity and individuality and
making them into non-persons. If you are a victim of this one of the things you
can do is fight back.

This chapter is not written for people who are not yet sure whether school
is good or bad. It is written for students that realize the way that compulsory
education and grades destroy the natural curiosity so many children feel... Who
realize how the tracking system keeps the poor people and minorities in our
society on the bottom while keeping the rich and powerful on the top... Who
realize the danger of teaching complete obedience to authority and who are fed

20 WAYS TO SABOTAGE YOUR SCHOOL

WHAT FOLLOWS IS THE MOST IRRESPONSIBLE EXERCISES IN FREE SPEECH I HAVE EVER SEEN.
IT WAS FIRST PRINTED IN 1968 BY SOME HIGH SCHOOL KIDS IN AMERICA'S
INDUSTRIAL HARTLAND AND MOST RECENTLY (IN ENGLISH AT ANY RATE) IN ENGLAND AFTER THE RIOTS THERE IN 1982. OF COURSE I REPRINTED IT FOR PURELY  EDUCATIONAL PURPOSES - JUST TO SHOW YOU HOW IRRESOPNSIBLE FREE SPEECH  CAN GET. I TAKE NO RESPONSIBILITY FOR THE ACTIONS OF INDIVIDUALS WHO USE  THIS TEXT.
NOW THAT WE GOT ALL THE BULLSHIT OUT OF THE WAY HERE ARE THE 20 WAYS I'VE BEEN TELLING YOU ABOUT.

50 Fun things to do in a final

50 Fun things to do in a final that does not matter (i.e. you are going
to fail the class completely no matter what you get on the final exam)
1.Bring a pillow. Fall asleep (or pretend to) until the last 15
minutes. Wake up, say "oh geez, better get cracking" and do some
gibberish work. Turn it in a few minutes early.

2.Get a copy of the exam, run out screaming "Andre, Andre, I've got the
secret documents!!"

Once three guys die and go to heaven. God welcomes them to heaven and says "People, you'll get a car while you're in heaven. Tell me whether you were faithful to your wife or not and I'll give you a car accordingly."
First guy looks up and says "Dear god, I've never cheated on my wife." God smiles and says "I know. Here's a Rolls Royce for you."
Second guy smiles nervously and says "Dear God, I've cheated on my wife couple of times. But I always took care of her." God smiles and says "It's okay. Here's your Ford. "
Third guy doesn't look up. God looks at him and says "I know you were not at all faithful with your wife. You'll get this shaggy buggy of your grandma's time."

After 3-4 weeks, last two guys meet up near a bar and find the first guy's rolls Royce in the parking. They decide to move in and check on him. But to their surprise they find him completely drunk with whole lot of empty bottles around him. They feel concerned and go and ask him why is he drinking so much.

The first guy looks up and says, "I saw my wife on a bicycle today."